A Vertical Section on Via Ferrata Les Bettieres

This Via Ferrata is in a village called Peisey Nancroix which is a 40 minute drive from Bourg Saint Maurice.  You park in an obvious car park with toilet block on the left, near a mountain refuge, just keep going up the valley and you will find the car park, go to far and the road soon becomes a dirt track. Cross the river on the foot bridge and follow the sign to the right, soon you swing left along a tree line and follow the sighed footpath to the foot of the climb. It has three different levels in three parts and is suitable for climbers of all abilities. It ascends from 1610 m to 1910 m and offers spectacular views.  We climbed the first two sections in August 2015 and finished the job in August 2016. The first two sections have some great vertical sections and a 20 foot monkey bridge, the rock is solid with good holds or gear everywhere you need them, fantastic views and a lovely vertical section.

The third section has a short overhang with an alternative route to the right which skirts around the overhang and rejoins the cable above. This means you can do the top section in an easier way than the bottom two, or be brave and do the overhang.

The decent from the top is via a descending via ferrata to the left then a steep fairly rough zig zag path through the woods.

Escape from top of the first section is via cable and path to the right. To exit above the second section the cable goes left and down the zig zag path.

The first time we did this we went around 9/10 in the morning, it got very hot. In 2016 we left the car park at 7am and got back down around 11 with that super smug feeling that you were first on the mountain and saw the sun come up on the mountains, much better and we also had time left for the Via Ferrata Roc Du Vent in the afternoon. 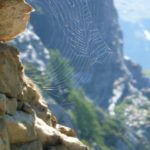 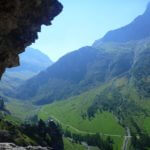 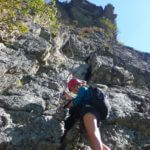 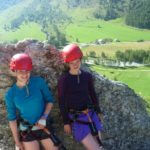 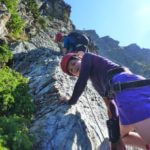 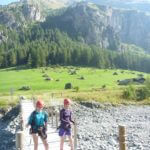 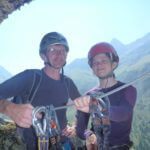 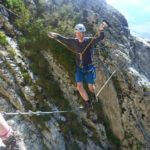 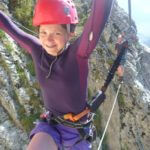 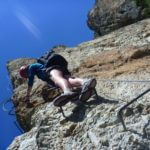 A Vertical Section on Via Ferrata Les Bettieres 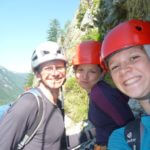