See the light with classic lamps from Petromax

Petromax is the brand name of a pressurised paraffin lamp that uses a mantle. The name derives from the word ‘petroleum’ and the name of its designer ‘Max’ Graetz. 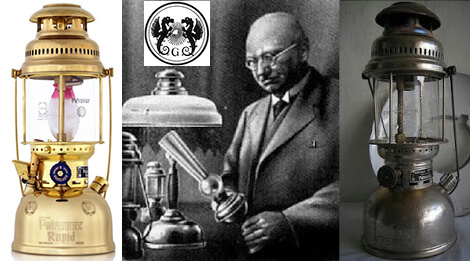 It was produced by the Ehrich & Graetz Metalworks, a factory originally set up in Berlin in 1866 by Emil Ehrich (d1887) and Albert Graetz (1831-1901). The firm’s logo of two seahorse-looking dragons with a sun between them is still in use today.

By 1897 the firm was controlled by Albert’s sons, Max and Adolf Graetz. The company had grown rapidly and in 1899 a factory complex was built in the Elsenstrasse in Berlin. By that time the company also had establishments in the United States, France, the UK and India.

Max Graetz (1861-1936) was the President of the firm and also its main designer and in 1910 he invented the Petromax lantern. Graetz had wanted to create a lighting system fuelled by paraffin, which was at that time a new product. He invented a process to make a gas out of paraffin and then designed a pressure lamp, working with vaporized paraffin. From 1916 the lantern and its name started to travel around the world.

The design was such a success that it is still being used to this day and when we first spotted the lamps at a show in Germany we knew we just had to make it available to our customers here in Wales. The name Petromax has become synonymous with paraffin pressure lamps in many countries and the design of the lamps was later used to create a cooker based on the same principles.

Around 1925 the factory also produced radio and other electrical appliances under the name Graetzor. In 1928 Fritz Graetz, the son of Max, took over management of the firm.

The company was used for war industry during the Second World War but by the end of 1945 the factory was only producing pots, pans and other small metal work. In the divided Germany that followed the war the firm was located in the east and in 1949 it became part of the ‘peoples’ program, meaning the factory was owned by the people for the people.

In 1948 Fritz Graetz founded a new company called The Graetz Firm, which was successor to the lost family company in Berlin. This new company produced mainly radios and televisions but the Petromax lamp was revived and produced here in great numbers. In 1961 the company was sold and since 1987 it has been owned by the Finnish company Nokia.

People are fascinated by this long-established lamp, which is still handmade from more than 200 individual pieces. They are extremely popular due to both their bright light and impressive appearance. You can turn night into day with a high-powered lamp by Petromax, and at Pro Adventure we stock over thirty Petromax lamps and accessories.

Read our review of the Petromax HK500 paraffin lamp here: