The ProAdventure store is located on Castle Street in the town of Llangollen, but the surrounding area is very scenic and there are many different walks and activities which people can take part in. We thought we should talk about some of the wonderful locations that surround us and this month we’re focusing on the nearby Horseshoe Falls and Velvet Hill. 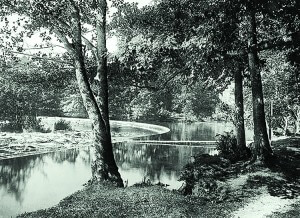 Described by some as the prettiest in North Wales, the four mile walk to the Horseshoe Falls and the Velvet Hill takes about two and a half hours covering a distance of four miles.

Horseshoe Falls is a picturesque artificial waterfall on the River Dee near Llantysilio Hall in Denbighshire. Located about three miles west of Llangollen, the distinctively shaped 460-foot long semi-circular weir helps create a pool of water that can enter the Llangollen Canal (through an adjacent valve house and flow meter).

It was designed by engineer Thomas Telford in 1806 to supply water to the Shropshire Union Canal. However, the canal took so much water from the river Dee that many of the local mills were forced to close. The weir itself was an important factor in the retention of the canal to Llangollen when the Shropshire Union system closed much of the network in 1944.

Because Horseshoe Falls was a major supplier of water to that system, the canal from Llangollen to Nantwich, including the great aqueducts at Pontcysyllte and Chirk, was retained purely as a water supply channel. This action enabled the canal to survive until it was taken over by British Waterways in 1948.

Since then, the canal has become one of the most popular cruising canals in the country. The final 1.7 miles from Llangollen to the falls is not navigable by motorised boats, because it’s not wide enough for vessels to turn around, but the towpath extends along the bank right up to the falls.

Since 2009, the weir has been part of a World Heritage Site, which covers 11 miles of the Llangollen Canal from just above Horseshoe Falls to just below Chirk Aqueduct.

The delightful four mile walk begins at the car park at Llantysilio Green, less than half a mile from Llangollen. It leads over rolling hills, through woodland and riverside pastures and explores the Horseshoe Falls and Velvet Hill on route. Velvet Hill gets its name from the soft texture of the sheep-cropped grass and moss and while it makes an ideal walking route, it is always advisable to wear a good hat and sun cream when traversing it.