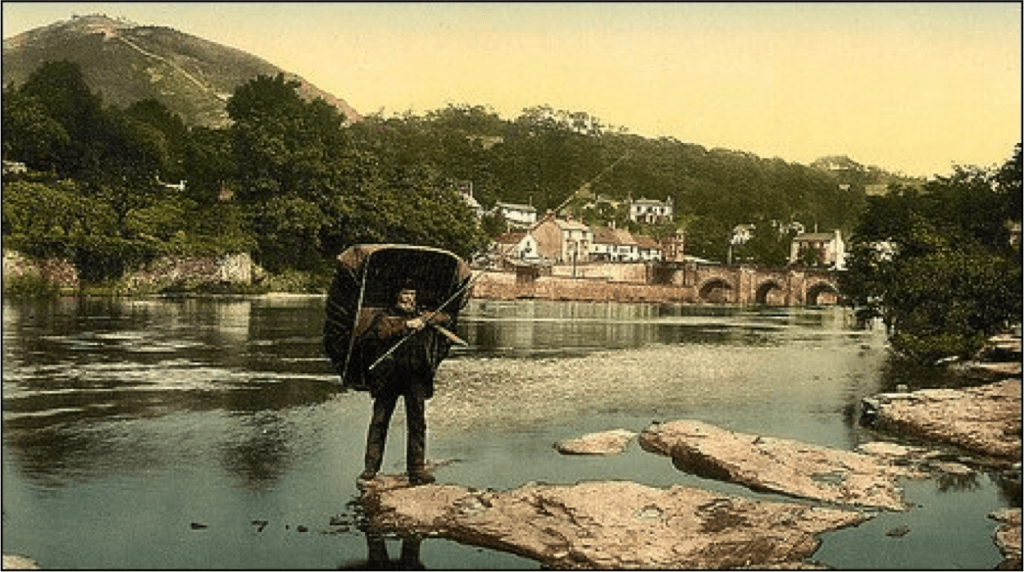 Coracle fisherman on the Welsh Dee

Canoeing and kayaking have been with us since prehistory. Every aboriginal people have developed the canoe as a means of transportation. The Pacific islands had been reached by canoe before recorded history, Greenlanders visited the Shetlands as early as the 1600s, and North America was opened up to trade by developing the native canoe and expanding existing trade routes. Every Aboriginal people have the canoe and all developed the J-stroke. 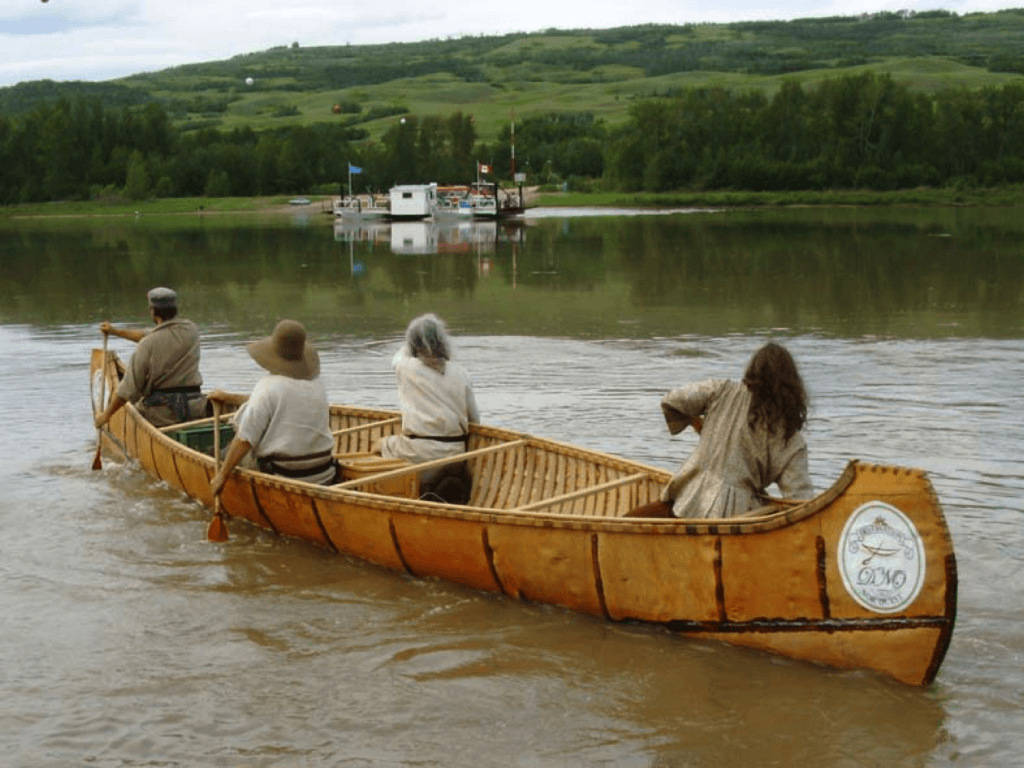 Voyageurs paddled thousands of miles across Canada in 24 foot birch bark canoes, carrying trade goods and returning with furs for Europe. They paddled sixty strokes a minute from dawn to dusk with only five minutes every hour for a pipe of tobacco and no lunch, just breakfast and dinner. 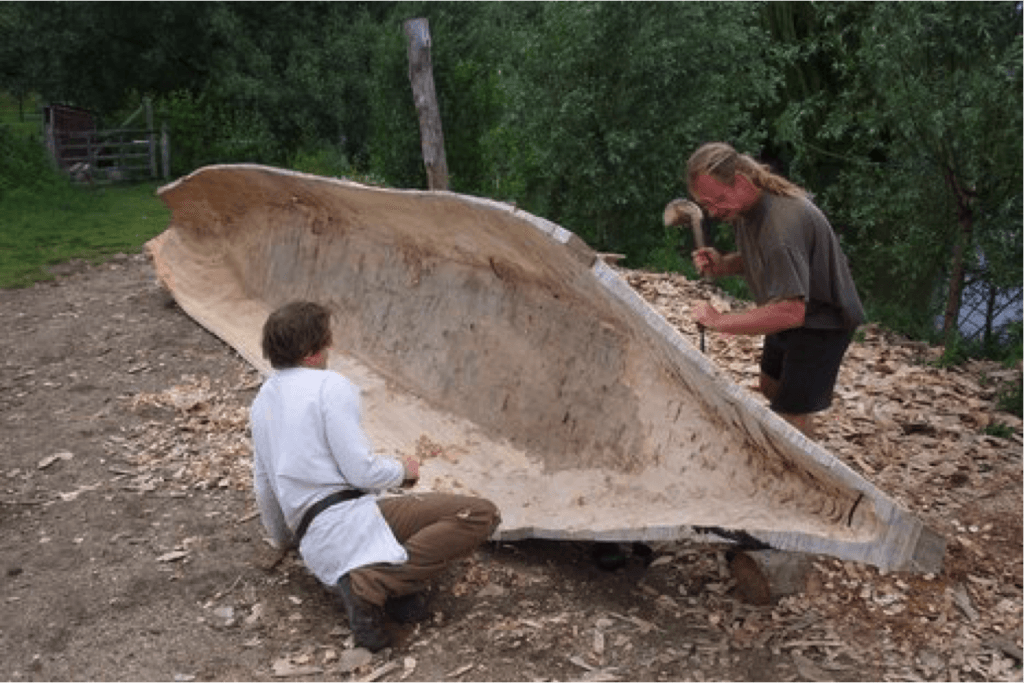 The dugout canoe, sometimes with outriggers or as a double canoe has been used for large ocean voyages in many parts of the world. 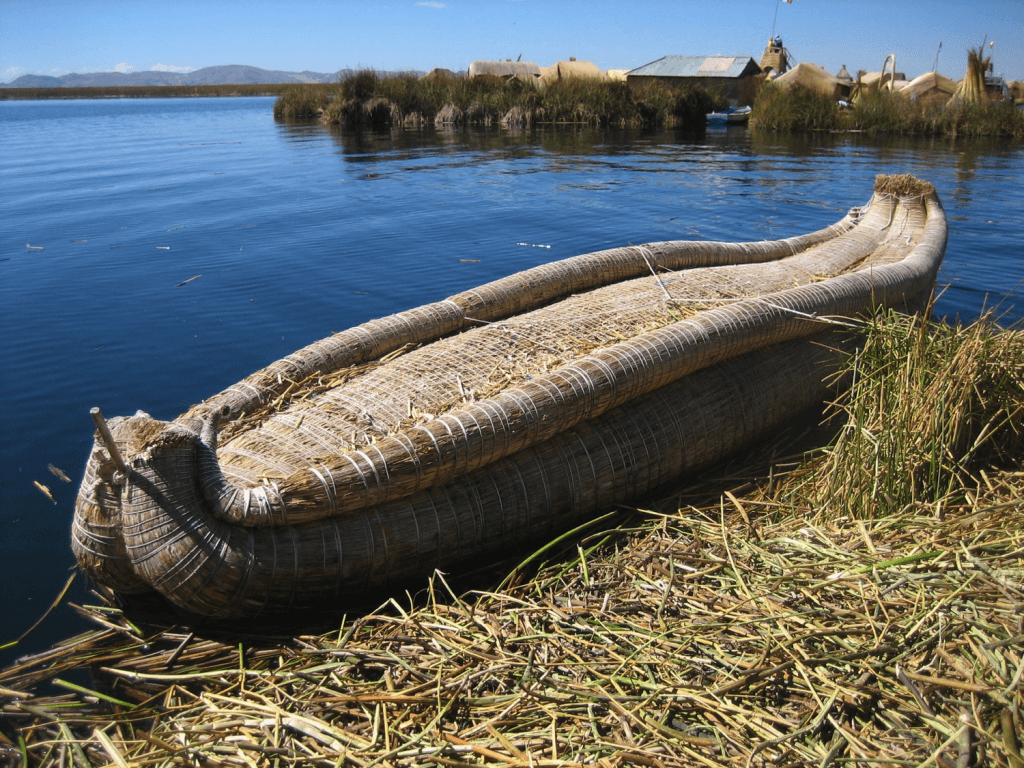 A reed canoe on Lake Titicaca

Reed canoes have been used in several cultures, the one above is on Lake Titicaca, but ancient cultures are thought to have crossed oceans and this was proven possible by the expedition of Thor Heyerdahl. 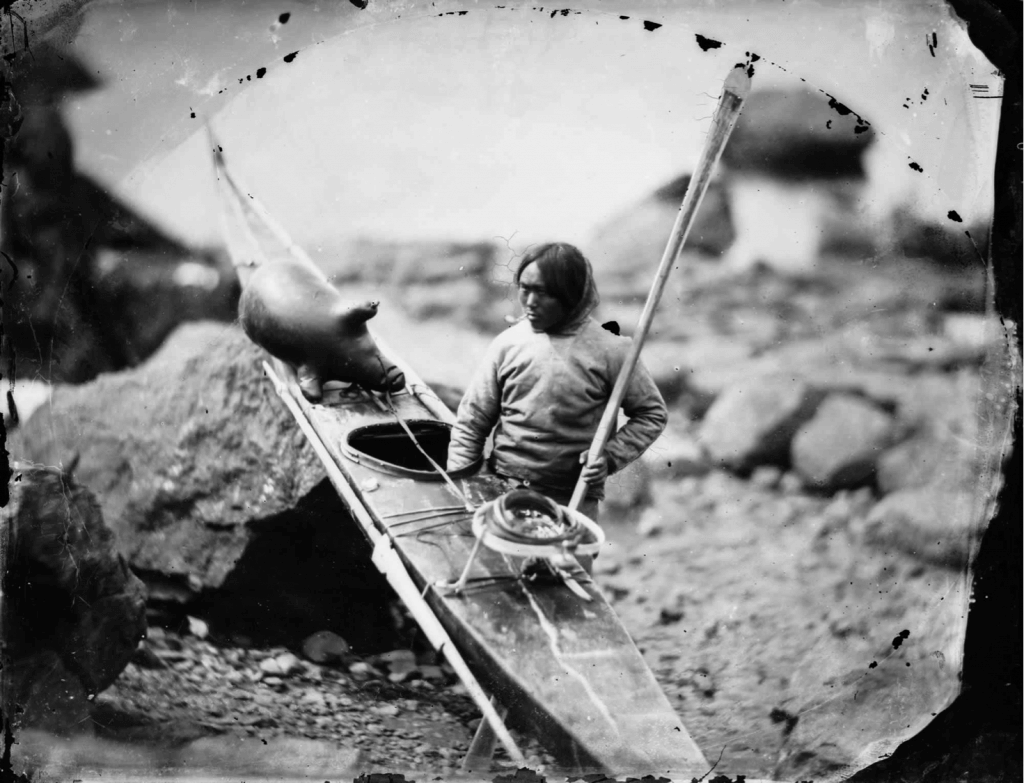 The Inuit developed a unique craft in the kayak, a hunting boat made with their limited resources of driftwood and animal skins. This robust craft is used for spear and historically bow hunting. Note the Greenland style paddle, which has many advantages over the modern sea kayaking paddle; (float, wind resistance, great for rolling and in storms). They also made large open canoes of the same materials for moving goods and people. 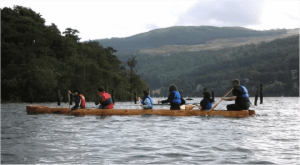 Dugout canoe remains have been found throughout Britain, but our modern kayaks are derived from the Inuit craft and our canoe designs have their origins in the birch bark canoes of North America. The ancient Celts used skin curraghs and coracles on oceans and rivers, our own River Dee has two local designs of coracle, one for the estuary and the other from the upper river. Recreational canoeing is first recorded in 1830 with a crossing from Cherbourg to Alderney of a Mr Canham from London in a canvas on frame kayak about 10 feet by two feet. He carried flares and even had some buoyancy in the form of long bags filled with bladders. We still use airbags for the same purpose today. 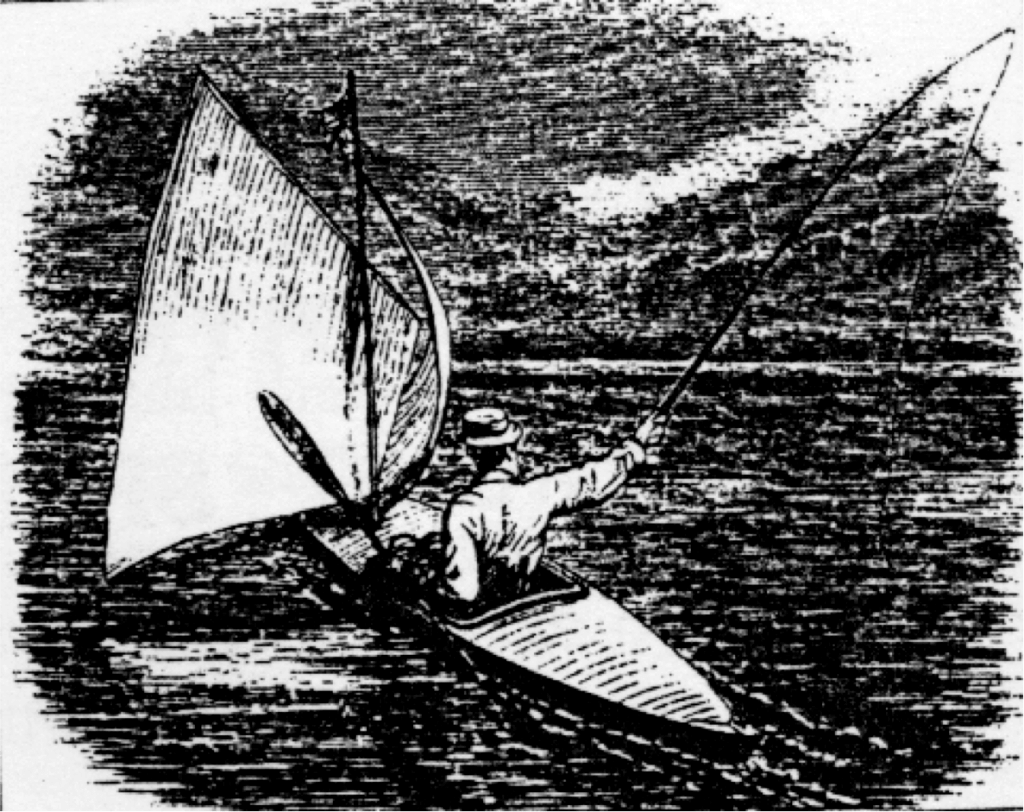 Inspired by native canoes in Canada, barrister John ‘Rob Roy’ MacGregor had the first of a series of canoes built in London rigged for paddling and sailing, and went on several major trips. His books instantly popularised canoeing. He undertook trips to Scandinavia, the Middle East, Holland and the Shetland Isles – trips many of us aspire to today. Many designers produced this style of canoe (more correctly kayak) in the UK, including a member of the Baden Powell family. At the same time Canadian-made clinker canoes where imported to the UK, which is why we still describe canoes as Canadian Canoes, and MacGregor is likely to blame for the confusion between canoes and kayaks in the UK.

First Regatta 1867
First Olympics 1936 Berlin (folding kayaks)
First international win 1953 in Duisburg in K4
Glass fibre and the Holme Pierrepoint Centre in Nottingham popularised sprint canoeing and kayaking in the UK
The First British Olympic medal for sprint was in 2000, a bronze for Tim Brabants in K1 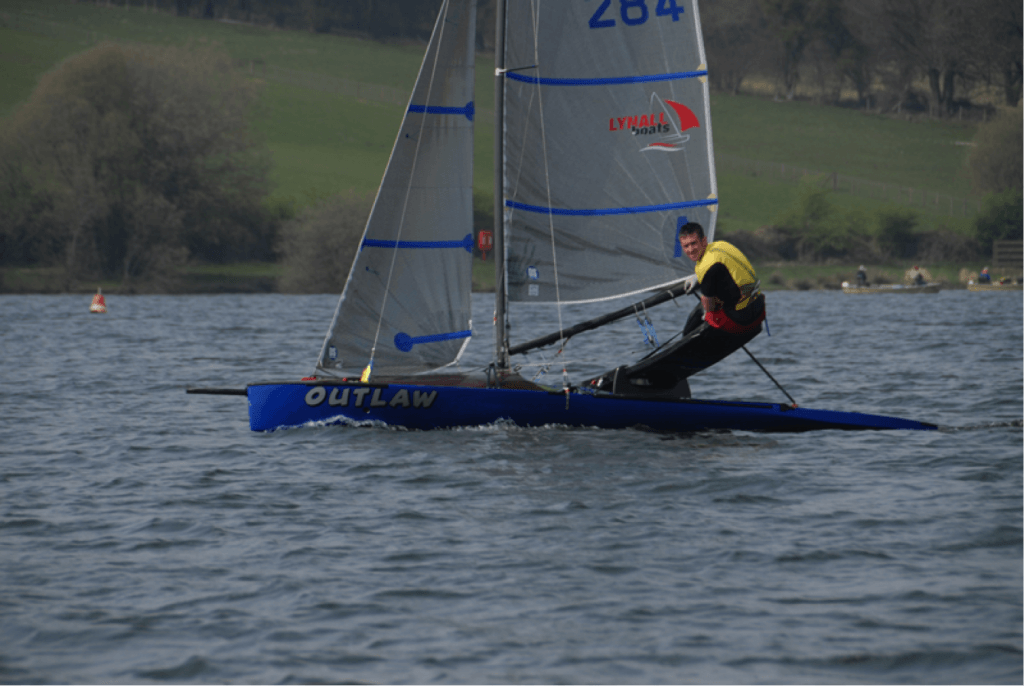 MacGregor had a sailing rig and W. Baden Powell developed the sailing rig a lot further. There were two schools of thought at the time, paddling canoes that could be sailed and sailing canoes that could be paddled if there was no wind. Culminating in the Clyde Canoe Clubs 5 ton centreboard canoe yawls, this branch of canoeing gave birth to small yacht cruising. The first canoe sailing race was in 1874. The sliding outrigger came in America in 1887. The international 10 was developed in the 1930s and 40s. This is one of the fastest small sailing boats. 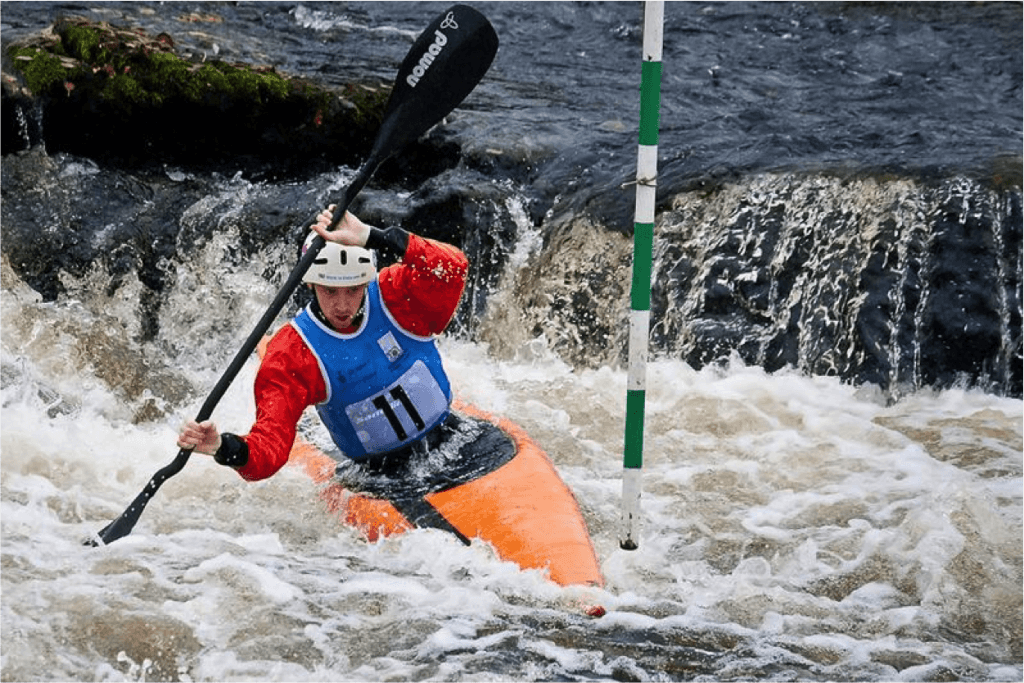 Canoe slalom started in 1934 in Vienna with the first British Slalom at Trefor Rocks near Llangollen in 1939.
In the fifties the Czech Milo Dufek took canoe strokes across to the kayak with the bow rudder stroke, now a fundamental in both slalom and recreational kayaking.
Folders were replaced by fibreglass in the fifties and technique improved.
In the eighties Tryweryn at Bala was developed for international standard slalom and river racing.
Slalom entered the Olympics in 1972 at Augsburg and another artificial slalom course was built at Nottingham in 1986; and of course two pumped courses were built at Lea Valley for the 2012 London Olympics.
The Bala world championships in 81 was won by Richard Fox (one of many world titles), and now his daughter Jess is pushing at the top in both Canoe and Kayak Slalom.
Slalom declined with the introduction of plastic playboats, and perhaps with easy access to white water year round at Tryweryn and artificial courses. In its heyday there were up to 15,000 racing, now around 1,000 are ranked slalom paddlers in the UK.
Paul Radcliffe, a member of the Llangollen Canoe Club won K1 Silver at the 2000 Olympics in Sydney. 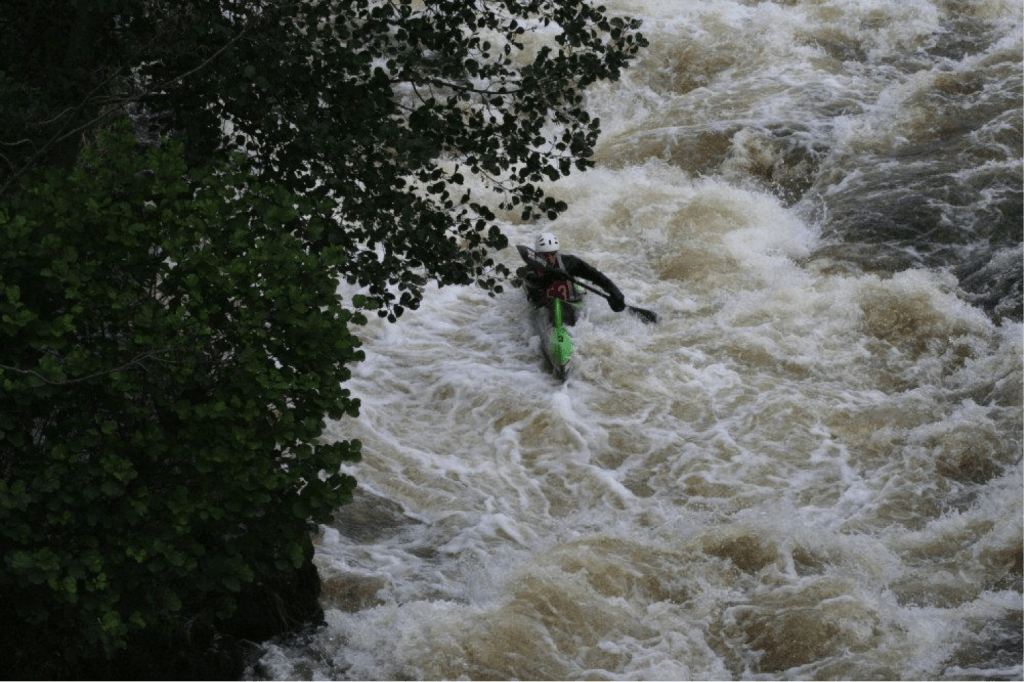 The 1981 Bala worlds was organised in Bala by George Davies and Stan Cooper.
Nationals and internationals have been held at Llangollen for many years. 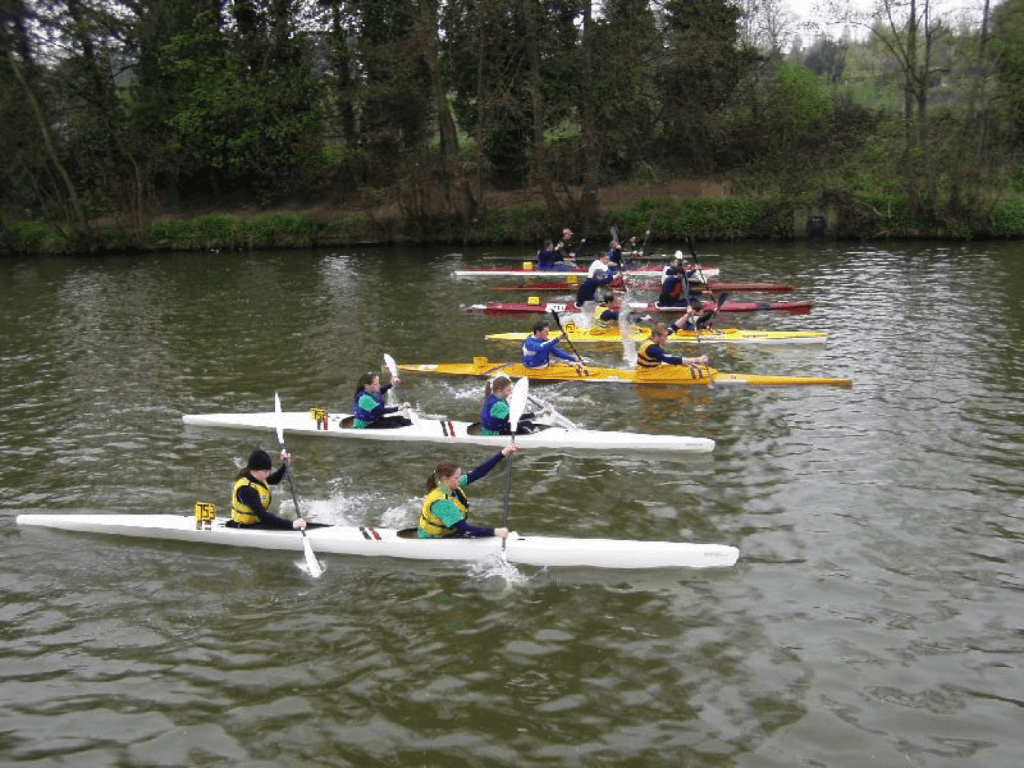 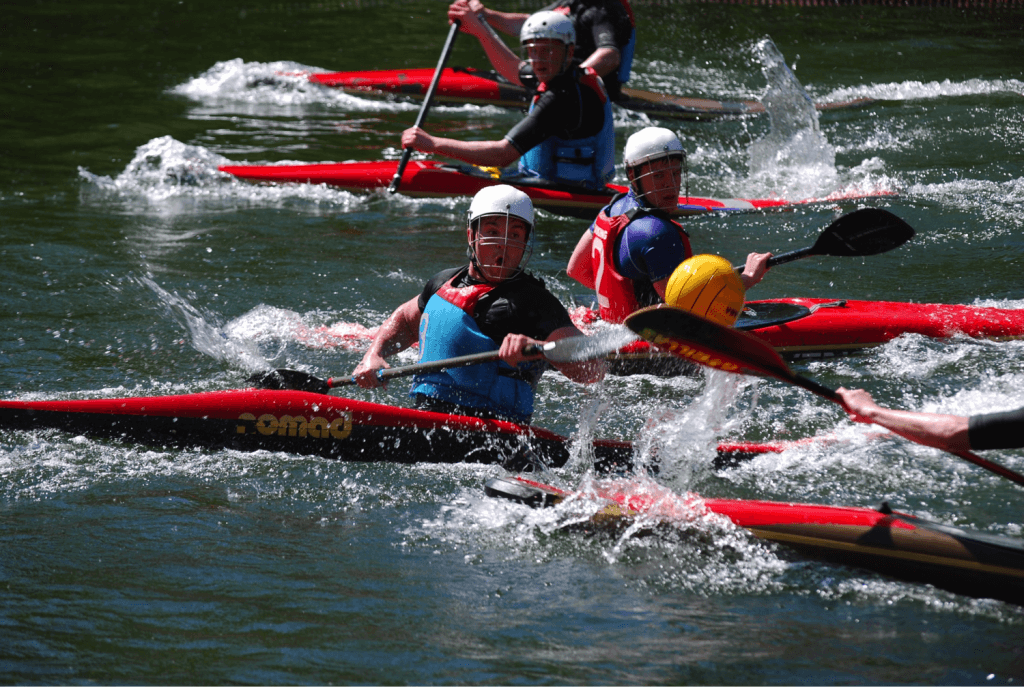 A Canoe polo-like game is shown in an 1880 painting on the Firth of Clyde.
In 1970 the Crystal Palace Canoe Exhibition had a canoe slalom demonstration.
A British National League was formed in 1979.
Many canoe polo boats are made at Mike Daltons Nomad works at Mile End Mill.
Canoe polo is played in swimming pools or outdoors.
Boats are made of modern composite materials for light weight and stiffness. A game of canoe polo needs a good referee or it can degenerate into a melee of broken boats and arguments. 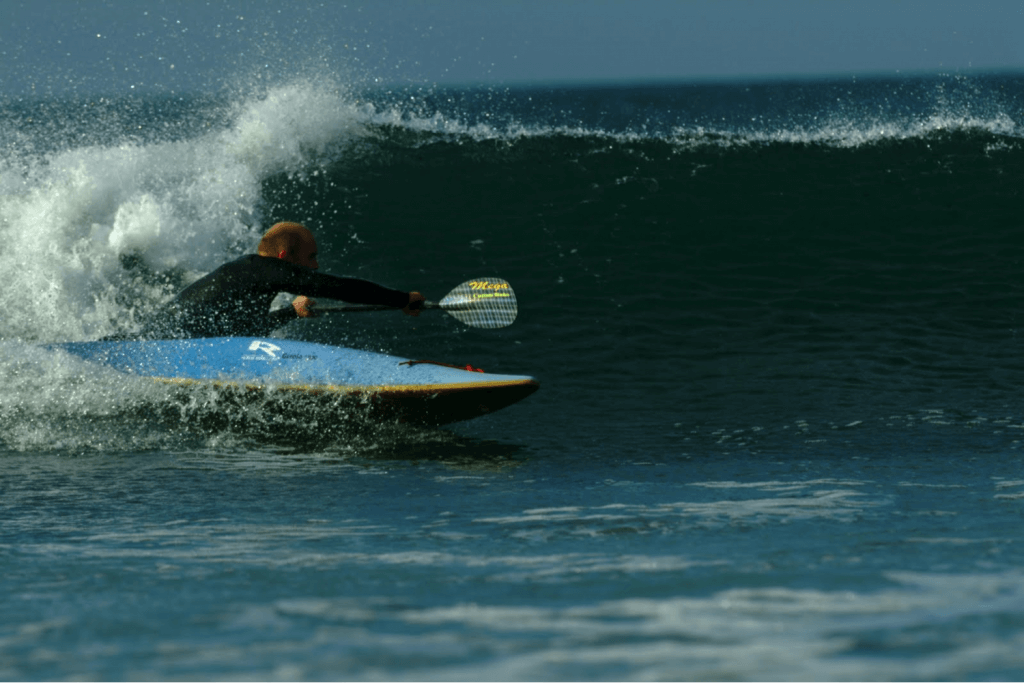 There has been lots of Welsh success in kayak surfing, as we do have some brilliant surfing beaches.

Britain has some of the worlds best surf with regular international competitions for board surfers. 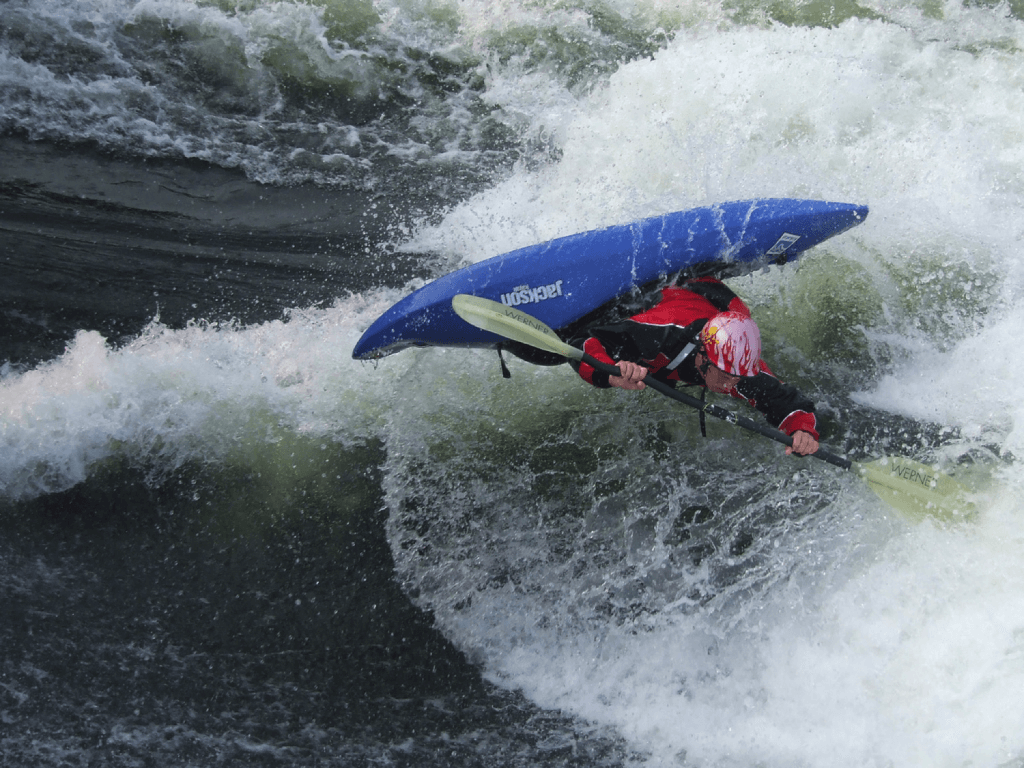 Freestyle kayaking began with a bunch of friends playing on water features (waves and stoppers). Nottingham and Hurley Weir on the Thames are centres of the sport in the UK. Very specific boats are used for spectacular moves, including cartwheels, loops, McNasty’s and many more. Points are scored for the best tricks in a 30 second heat.

The River Dee in Wales has a great history of tours including the Mike Jones Rally, WCA Tours, Universities Weekends, Cardboard Canoe Races and more. British paddlers including Dave Manby of Llangollen have made many first descents including the Dudh Khosi of Everest.

Extreme expedition paddling is done in plastic white water boats and creek boats for the really steep stuff.  Both North and South Wales have some of the best White Water Creeking Rivers in the World.

Gino Watkins brought the sea kayak to Britain in the thirties, and Pawlata introduced the kayak roll.

Gino Watkins, explorer, hunter, outdoorsman, hunted to support his expeditions to find an air route to North America with places to land and refuel. His descendant John Watkins still lives in Llangollen. Local kayak coach Leo Hoare organised an expedition “to find Gino’s grave”, although Gino didn’t actually have a grave. He went hunting alone and probably fell in off an ice floe. Only some of his clothes were found. 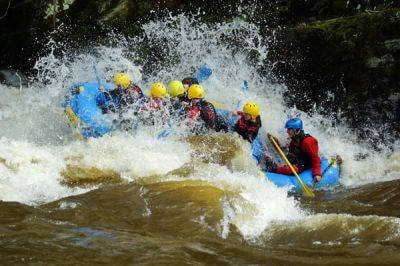 Rafting is one of the earliest means of transportation, used as a means for shipping people, hunting and transferring food.

In 1842, Lieutenant John Fremont of the US Army first journalised his rafting expedition on the Platte River.

In those days rafts were constructed from four independent rubber cloth tubes and wrap-around floor.

In the 1960s, white water rafting became more widely recognized and routes like the Grand Canyon were routed and whitewater rafting companies were established.

In the 1970s, white water rafting marked its major development as a leisure sport when it was then included in the Munich Olympic Games.
In the 1980s, as rafting continued to gain in popularity, a lot more rivers started to be used by the pioneering independent companies throughout Scotland, South America and Africa.

In the 1990s, rafting was included in major game events like the Barcelona Games in 1992, Atlanta Games in 1996, and the white water events of the Summer Olympic Games hosted by Ocoee River in Tennessee Valley. In addition, the International Federation of Rafting was instituted in 1997 and in 1999 the first Official International Championship was held. 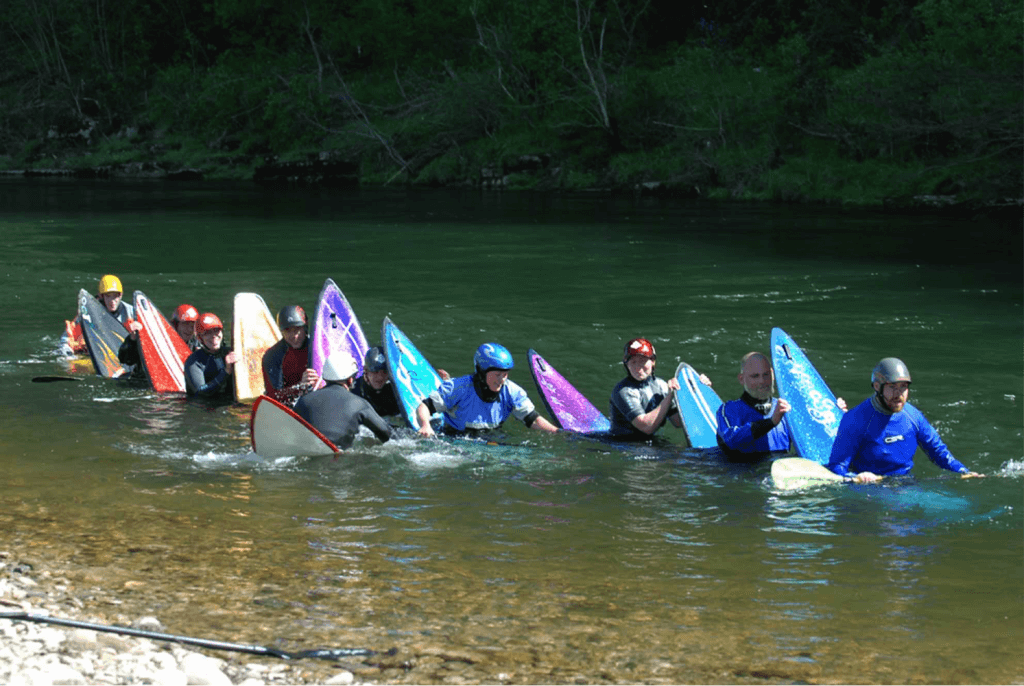 Squirt boating developed out of slalom kayaks cut down for play. Squirt boats are generally made as sinkers, designed for mystery moves where the paddler uses the flow to get the maximum downturn under the water, or slightly more buoyant boats designed to cartwheel and surf on the green water under the white water of the river. The Snyder brothers in the US were the originators of squirt boating. 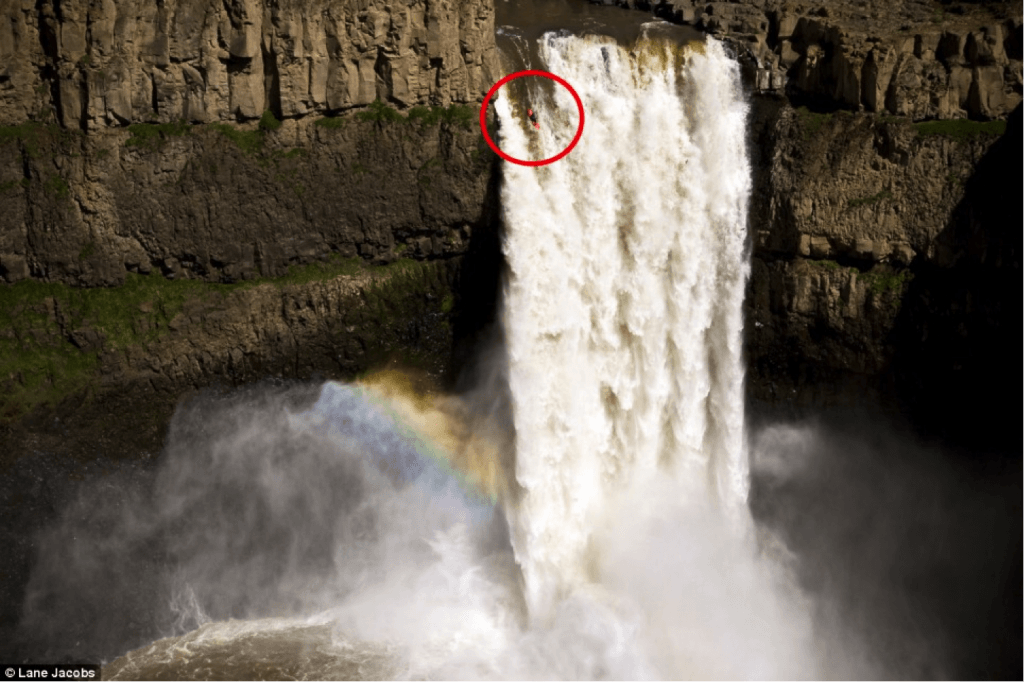 Not for everyone but some kayakers love waterfalls with current records pushing towards 200 feet. Almost all of Wales’ significant waterfalls have been paddled including Swallow Falls, Conway Falls, Sgwd yr Eira and even the very scary Llanberis Falls have had descents.

So in summary, canoeing and kayaking are amazingly diverse, with something for almost anyone. There are short boats, long boats, high volume boats, fast boats and slow boats. Kayaks and canoes can be sailed, paddled, poled, lined, tracked, pushed and pulled, portaged and towed. You can’t just get close to nature, you can be part of it. You can work hard and train hard, take it easy, enjoy solitude and companionship, the wilderness or urban canals, rivers and tunnels, scare yourself on the sea, paddle lakes, creeks, artificial waves and courses and experience a lifetime of pleasure. Boating helps you grow and learn, appreciate nature, understand yourself and much more.

So pick up a paddle and experience that amazing moment when your boat settles on the water and breathe in deep before your adventure begins.

A guide to canoeing the Llangollen Canal World Heritage Site