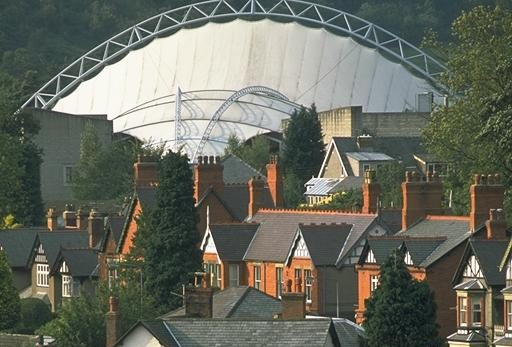 The Royal International Pavilion was opened by Queen Elizabeth II in 1992. It provides the main venue for the annual Llangollen International Musical Eisteddfod, where musicians and dancers from across the world compete in a spirit of friendship and harmony.

The pavilion was designed by DY Davies Associates as a venue which could be expanded to accommodate the large Eisteddfod audiences, while at other times of the year providing a smaller auditorium for performances and other events. The building features an eye-catching main entrance, with offices and stage area enclosed in a structure clad with stone and roofed with slate. Canvas is used to enclose a grassed area for the larger Eisteddfod auditorium, retaining the atmosphere of the Eisteddfod’s original marquee. The pavilion is operated by Denbighshire County Council.

The Eisteddfod was first held in 1947 as Wales’ response to the horrors of two world wars. The theory was that music is an international language, and bringing together people from countries around the world would foster tolerance, understanding and peace. More than 4,000 performers travel to Llangollen each July to compete in around 25 competitions. The experience of performing at Llangollen has inspired some contestants to follow musical careers including  Luciano Pavarotti, who sang at Llangollen with his local choir from Modena in 1955.

The site is owned by the Eisteddfod, the building by the county council, with the Eisteddfod having the exclusive use of the site for one month per year.

The building was renovated a few years ago at a cost of £1.6 million.