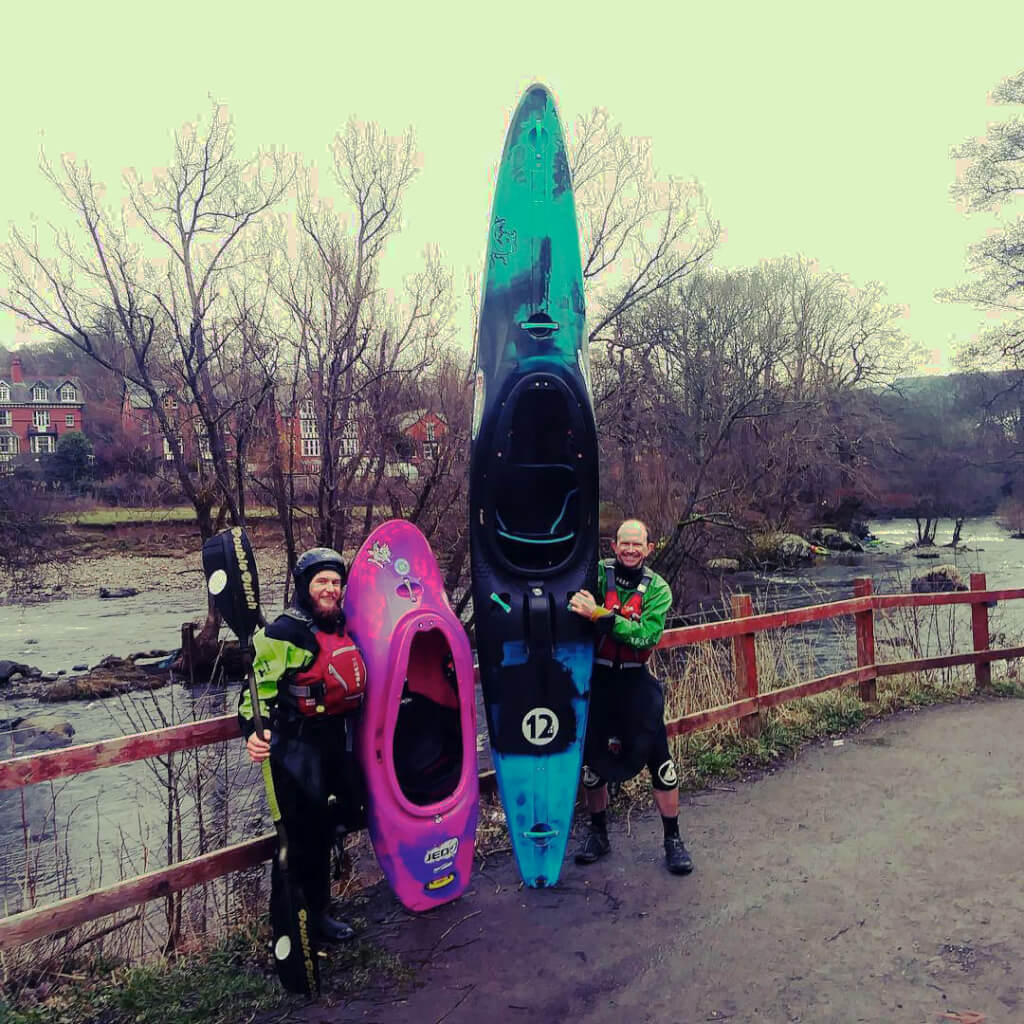 Thanks to Andy Lees of Go Kayaking Northwest there is a full selection of current Pyranha Demo Kayaks at River Active in Llangollen. As I paddle the site two or three times a week my interest was peaked when asked which boats I would be trying. In return for the loan of the boat I was asked to write a Pyranha 12R Review.

The 12R wasn’t on my list until I turned up on a bright and cold Sunday in February in the mood to paddle a loop, down the River Dee to town, then up the canal and drop back into the river for the return to Mile End mill. I paddle a Jackson Mixmaster mostly, so not ideal for the paddle up the canal, and there above the door was a brand new, unscratched Pyranha 12r just waiting for me to demo.

How I Tested Out the 12R

A quick warm up above the top weir started to show the boats character, it likes to be driven, across eddy lines, across the current, against the current don’t drift it, drive it from the front of the boat.

I soon dropped (rather drove) down the first drop and carved sweetly into the top eddy. The 12R tracks well and loves to carve in, and out of eddies. Hang on to some power when you break out, keep the power on and drive the boat out again and you will feel the boat carrying its speed.

Turning on a dime

With the top of boat in front of the cockpit looking like a white water racer you may, like me be tempted to use outside edge to steer or turn the 12R. This doesn’t work, but when you edge to the inside of the turn the 12R spins, just make sure there’s enough room to swing the ends round without hitting other paddlers or the top of an eddy. Just like carving through an eddy the 12R has the feel of a slalom boat when you work it well, a strong bow draw like a slalom paddler uses will whip the boat around very quickly when on edge.

The gauge at River Active was on a 4, so low winter levels. A bit of a scrape over the rock above the auto boof on river right, it was easy to stay straight or correct a little on the way down and screamed into the chose eddy below the falls.

Upstream on the canal

The 12R has a good deal of boat out of the water with my 70kg in it, so it’s not at it’s fastest on the flat. I can get my knees up and together for comfortable forward paddling on the flat which made it easy enough to drive the boat up the canal to the put in.

Back on the River Dee

Seal launching down the ramp into the river was dry and stable.

Running down the wave train below the Chain Bridge Hotel got the boat moving nicely, then on to the Serpents Tail. I chose to power through the diagonal wave near the top which went smoothly, then I eased and a bit of a theme began to develop, run a drop then carve into an eddy. To carry on through you need to drive on after drops, the way I was paddling it anyway! I found it automatic to outside edge to turn when running rapids, not the way to do it with this boat. Driving forward strongly with some edge on the inside of the side you want to turn towards is enough to dictate which way you want to head on the way down the river. This way you accelerate out of drops with speed and can steer enough to line up for the next rapid without big steering strokes slowing you down.

The Pyranha 12R is fast on the river.

It’s manoeuvrable both on tight turns, in eddies and half way down rapids and also when powering down the river in race mode you can turn without losing significant speed.

It’s not hard to paddle, so don’t be scared. It will turn in familiar ways for a creek boater but is still enjoyable if you have experience in faster longer boats. Carrying speed and carving are a joy in this boat and I want to do some boater cross in it. It will flat spin happily on the bottom wave at River Active.

I need to paddle it more of course, if there is a race that allows a 12 foot boat it should be a great paddle. I didn’t take time to try it surfing on waves or stoppers, so a more leisurely loop is on the cards. If you want to demo it please book it in with River Active and it takes a couple people to get if off the high shelf.

Events in Llangollen in 2019