We have been selling and using throwing axes at ProAdventure for many years.

It may surprise you that we have had no significant safety incidents, but managed well axe throwing is a fun and enjoyable activity. Here’s my eldest daughter with axe ready to throw. 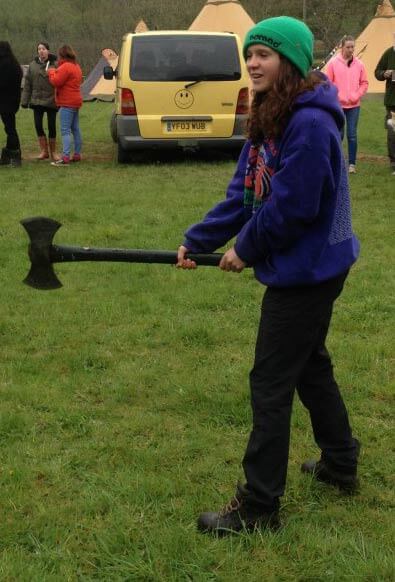 We have reproduced the Swedish rules below for you. It’s well worth buying a few spare axe handles, and don’t throw if there is already an axe in the target.

Only the ‘Fore-Bit’ of the Double Bit Axe can score a hit on the target area – but the bit must stick in the target. The Fore-Bit only needs to nick the line separating two scoring areas to win the points of the higher scoring area. The winner is whoever has the best score after three throws.

§ 1 A Double Bit Axe is thrown at a wooden target. The max. and min. dimensions for the competition throwing axe are as shown above.

§ 3 The thrower must not step over the throwing line before the axe has hit or missed the target. This should be monitored by a line judge. A thrower who steps over the line gets 0 points.

§ 4 The Fore-Bit is the bit facing the target at the moment when the thrower releases the axe in their throw at the target.

§ 5 Only the Fore-Bit of the Double Bit Axe can score a hit on the target area – but the bit must stick in the target. (In a traditional throw, the axe handle usually points towards the ground for a valid hit.)

§ 6 The Fore-Bit only needs to nick the line separating two scoring areas to win the points of the higher scoring area.

§ 7 The Back-Bit must not touch the target. If the Back-Bit touches the target, the throw is given 0 points, even if the Fore-Bit has hit the target at the same time.

§ 8 The winner is the person with the highest points after at least three throws, or the number of throws announced in advance by the organiser. (Best of five or six throws is common).

§ 10 The design and measurements of the target and the points for each circular section are shown in the illustration above.

Cordon
The risk area is to be cordoned off with tape, rope or suchlike. Stickers or signs bearing the text ‘No unauthorised access’ are to be placed along the cordon.

Umpires
There must be one umpire for each target.

Throwing
All the competitors in each round throw at the same time on a given signal from the referee or announcer.

Marking
When given clearance by the referee, the umpires go up to the targets to mark the throw. The axes are then removed from the targets and returned to the competitors. When handing over an axe, the handle must always be pointed towards the recipient. The umpires must hold the axe in such a way that they do not touch the edge of the bits.

Sheath
The axes must always be kept in their sheath outside the competition area.